Sometimes looking at one picture reminds you of another one. Has that ever happened to you? I saw the two below on the same day, and I thought they went together so well.

I don’t even need to describe why these two go so well together. They mean something to me, but your interpretation could be wildly different.

Here are two more that have linkage:

So, here are two more:

It all seemed to turn around after I met Bob Marley. The day was kind of sour, but he said something to me I won’t soon forget.

“Will you roll this joint for me?”

I couldn’t believe it at first, but then I watched his fingers fumbling with the paper. Bright green stuff peppered the center of the paper, tilted to one end, threatening to fall out. He really didn’t know how to do it. Which got me wondering how many he had smoked in his life. And how many had he rolled in that same life?

And if he didn’t roll them, then who did? People like me who he met on the street?

It got me thinking how many times I’d felt like I was born to do something only to find out that thing was really hard for me.

Why did I quit when things got hard? I should’ve just kept after it ’til I got better at it.

Skateboarding when I was a young punk—that was hard—especially the falling down part; I should have done it more, fallen down less as I progressed.

What a great bit of advice! What a revelatory idea!

That Bob Marley is so insightful!

He made my day better. He helped raise my motivation level. I thought of more things I could have done if I worked through the struggling stage. Major League Baseball. Navigating the North Pacific. Parachuting. Aerospace engineering. Understanding women.

Even understanding Rastafarian escapism. Suddenly I did. I understood it. But I understood his advice that much better, so I told him, “Take your own advice. You’ll never learn if someone else does it for you.”

And I walked on, with a smile on my face.

I woke this morning and skipped the common starts. Instead of cereal, I poured milk into the coffee grounds. I grabbed a spoon and started chowing. It was gritty, like Grape Nuts.

While I was eating, I figured I’d save some time, so I fit things in between chews in this order: I started the 3D printer, clipped my toenails, and knitted myself a sweater.

Pretty soon my 3D printer was done printing the bus I had dialed in, so I jumped in it and revved the engine. Only then I realized the bus was in my living room. Shrugging my shoulders three times for good luck I said to myself, “You needed a new garage anyway.”

I busted through the walls. As I drove away I heard the wheels of the bus crunching over bricks and glass. Back and forth a few times, I recorded that sound and it became the soundtrack of the day.

Everyone knows I’m a power pack, except the ladies at the library, so I went and abducted all the books. I forced all the books at flamethrower-point to get on the bus. They folded themselves in like good soldiers.

In the driver’s seat again, I revved the engine and cranked up the soundtrack. Because I didn’t have assigned seats, there was some chaos. Westerns were mingling with Romances. Horrors were chewing on Young Adults. Non-fictions were making the Encyclopaedia Britannicas fall asleep! Amazing! but chaos, so I forced them all to group up into categories. (I don’t say genres because I’m not French.)

Once they were all settled, and not colliding with each other anymore, I figured I’d share my plans for The Really Angry Red Robot. I didn’t have room to build it before, but now that I had a new garage… 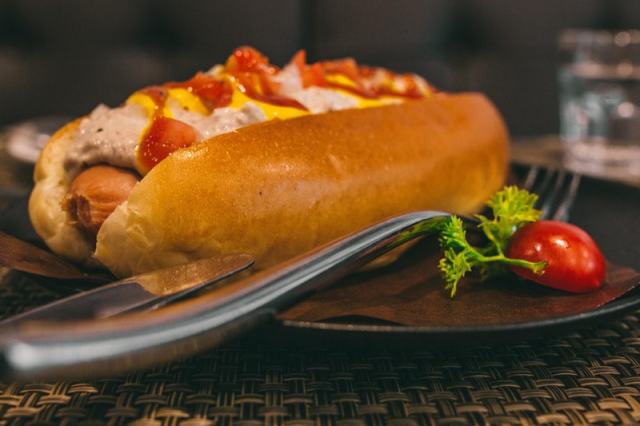 This reality was thrust upon me when, having a strange, almost pregnancy-like craving, I was forced to buy some sauerkraut to go with the hot dogs I had planned for dinner.

Reality is: buying sauerkraut is like going to someone’s house, rummaging through their refrigerator until you find the oldest leftovers in there, and then offering them money for it.

Reality is: sauerkraut is only good after it has gone bad. That’s not a contradiction, not exactly, because it isn’t really sauerkraut unless it has gone rotten for a few days, or weeks. Before it goes bad, it’s only cabbage. It earns the name after it’s gone through the trials of time and torment. There’s probably a life lesson in that, but I don’t want to go down that road. Not today.

You make it by putting your cabbage in a bucket in your garage, you cover it loosely, with gauze or something, and then you wait for it to begin the fermentation process. I’m not kidding around. That’s technically accurate. Actually, some people prefer putting their cabbage in glass jars, but most sauerkraut makers aren’t all that picky. I’m sure you can imagine. I’ve heard that the container can’t be fully closed or you end up with something completely different from sauerkraut.

The next step in the process, after you’ve lumped your cabbage in a bucket, you ignore it for a few weeks. You let it begin the fermentation process, but you don’t let it completely ferment. It just gets started and then you call it done. That might actually be a contradiction. But you really, really, really don’t want to put fermented cabbage on your bratwurst; it tastes terrible. Trust me on that. Don’t ever do it. You’ll have hallucinations of illnesses. You’ll have ghost flavors of dead things trapped in your gullet. You’ll have spasms in the muscles in your tongue. It’s a downward spiral. Your tongue will feel like it has been put in a bucket, thrust to the dark corners of the garage, and neglected—only to be remembered when someone in the house has a hankering for a hot dog.

One of my favorite Dr. Martin Luther King Jr. quotes: “I hope you can find some consolation from Christianity’s affirmation that death is not the end. Death is not a period that ends the great sentence of life, but a comma that punctuates it to more lofty significance. Death is not a blind alley that leads the human race into a state of nothingness, but an open door which leads man into life eternal. Let this daring faith, this great invincible surmise, be your sustaining power during these trying days.”

He gave this great thought during a funeral. I feel like it applies to life itself, not only the days and hours when we feel closest to death because of a funeral or loss of a loved one. We could live a more full life if we realize death is no ending. We might be a bit more bold, a little more wise, if we didn’t limit ourselves in our concept of life and death.

Another great thought from a great man, Dr. Martin Luther King Jr.: “The time is always right to do what is right.”

Beautiful, isn’t it? So if you combine his religion above with his imperative statement below that, you can catch a glimpse of his motivation—why he was so self-compelled to raise others. He felt that there was an immediacy to doing good, and that since death is an “open door”, there is no need to fear it. He certainly lived a life of acting on his beliefs. And he did a great deal to end racism. The people who wanted him out of the picture managed only to end his mortal ministry. His spirit lives on. His words live on as well. And because of these two truths, Dr. Martin Luther King Jr. will continue to influence the human race even after his murderer’s children have come and gone.