It has been said before (meaning I’m not the first to say), “People with good balance tend to be healthier than those with poor balance.”

A healthy routine of exercise could possibly contain activities which strengthen the legs and core and increase balance. A runner, a martial artist, or a skier would generally have good balance. But would you credit the balance for their good health, or would you say the balance is a result of the activity? In this case, with only these three athletes in mind, the deck is stacked for the activity, isn’t it?

Okay, so how about a swimmer? Swimming isn’t necessarily a foot-to-the-ground activity. The swimmers I know have really good balance though. Even if I selected only those who do swimming and nothing else, no running or other training on the side, they can still stand on one leg for a long time without falling.

Personally, I’m not convinced either way, especially since I have one friend who is a computer slave. He spends most of his days inventing things like robotizing his toaster oven to open the door remotely or making his doorbell say, “Welcome to the dark side,” in the voice of Darth Vader (James Earl Jones edition). Amazing inventiveness aside, his main source of exercise is walking—and not a lot of walking either. But I tested him, and he has decent balance. (The test consisted of me timing how long he could stand on one leg: “One one-thousand, two one-thousand…”) He has average balance.

I’m still not convinced of which is the side of truth in this controversy. I’m wondering if balance could be exercise in and of itself. To test the theory, I made my very own balance board. My uncle Kim had one of these when I was a kid, so I fell in love with the idea back then. It only served to increase my love of the balance board when I couldn’t play on it unless we were visiting my uncle. His balance board consisted of a small board with a large dowel as the fulcrum (very much like the one in the picture at the beginning of this article). When I made my own, I copied the idea, but I broke the fulcrum not long after the first try. It split right down the middle. While I was staring at this cool thing I made and wondering how to fix it, I realized it could have a single set of skateboard wheels in the middle, metal instead of wood. I tried that solution and it works fine. In fact, it has some motion front and back as well as side to side, so you really have to find your balance to work this creation. 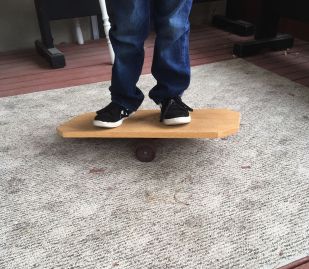 My boy loves to play on it. He counts, “One one-thousand, two one-thousand…” and tries to beat his previous record. I’ve tried it, and so far I can only go for seven seconds before I touch down. The time increases the more I do it, so that has to be good, right? Well, since I’m still in the middle of the test phase, I can’t give any definitive answer on the controversy other than the fact that when I can’t hold my balance board steady for more than two seconds, my boy laughs at me. He laughs, then I laugh. And laughing is such a health boost I think its putting a slant into the results of my experiment.

No one ever said, “People who try to show off their balance board skills tend to have happy children.” But I might.