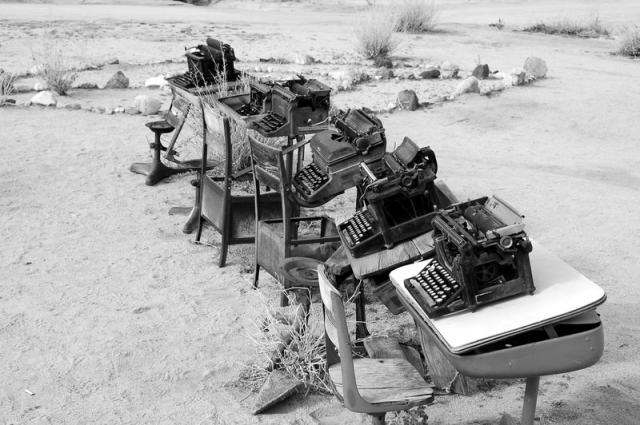 One of the methods I like to use to boost creativity in writing is the writing exercise.

There are many exercises including the writing prompt, which is a word or a phrase that spikes your juices. Creative juices.

Another one is the photo prompt. Take a photo, like the one above with all the typewriters on old desks, then you write a story about what you see.

Still another is people-watching. You watch humans in their native elements and you write about what you observe.

The one I want to promote here is what I call The Empathy Exercise. It’s similar to people-watching, because you need a little experience with real humans to make any of it work or to make any of it sound accurate.

To do The Empathy Exercise, I’ll take a subject that’s universal, like fear, and I’ll try to imagine as many different types of people and how they feel, sense, or deal with that universal subject. Sometimes I’ll take only one person (a character, for instance) and imagine all the emotions possible and how they react to them. Today, I thought I’d do nightmares. It’s fear, but more specific. What are people’s worst nightmares? How many nightmares, funny or realistic, can I imagine? How many nightmares can you imagine? To let you use this method yourself, I’ll list the categories first, then I’ll list my finished imaginings. If you want to come up with your own imagined nightmares for these categories, don’t read to the end. If you need a little more of a push to get your creative juices flowing, scroll down to see what you might do. If you want to come up with your own categories, no problem, stop here, don’t read any more, and I’ll list one more “if” statement so you don’t accidentally peek and feel like you’ve cheated. IF you want to write some creative categorical nightmares and leave them in the comments, I’d be happy to share them, as long as they’re not too ethically questionable. Here then, is the list:

And these are those I thought up:

Horror screenplay writer’s nightmare: no one cares what the monster looks like.

Spider’s nightmare: one hundred other spiders came to live in the same web.

Spiderman’s nightmare: the two spots on his forehead he thought were acne turn out to be growths of hairy mandibles.

Count Dracula’s nightmare: his victims were all lepers.

Vegan’s nightmare: carrots feel pain when they get uprooted.

CEO’s nightmare: getting paid (and valued) less than the janitor.

Democrat’s nightmare: to find out you’re as crazy as they say.

Republican’s nightmare: to find out you can see things from someone else’s point of view.

Radio DJ’s nightmare: there isn’t anyone out there listening.