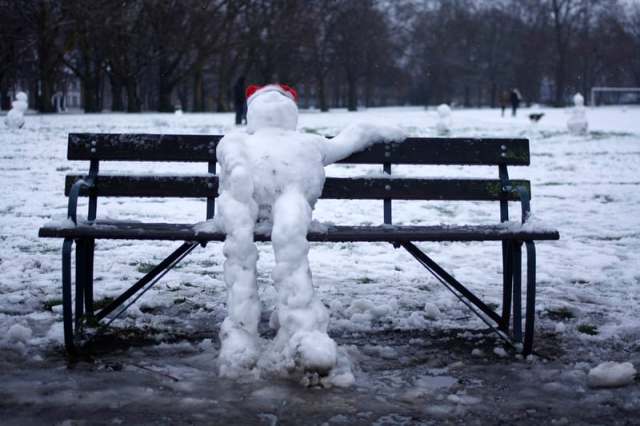 Serves me right for thinking it was only a little water in my sock.

Sit too long and you can become a permanent fixture in the park. Depending on the weather, of course, you can survive a splash of slush in your shoe. Not too many people have tried though. Most people are smart enough to remove the slush before it refreezes.

For every ten smart people there’s a snowman. He plays in the snow ’til he becomes one with winter. His eyes turn to coal, or so the legend goes. His lingo shifts to late Cretaceous Snowboard Era Drawl. His teeth are icicles, which makes him look positively demonic, but don’t fear him. He’s actually more fun than “tiger’s blood” on a snow cone.

As far as that goes, the only thing missing from a mountain ski slope is an army of snowmen. And I’m not only talking about the kind that play in the snow; I’m talking about the stationary stacks of snowballs. There wouldn’t be anything more fun to ski around, to jump over, to ski through, than a random line of snowmen. Every ski resort in the nation should hire some Snowmen to build snowmen. Who wouldn’t want a job like that? Especially if you were required to test your work? Test the durability of your snowmen?

Then again, if durability of the snowman was the ski resort policy, a snowman builder might use the age-old method of pouring water over the snow to turn it into ice and preserve it longer. That method could seriously damage a skier, or a snowboarder for that matter. Could you imagine rocketing down the hill, seeing a snowman up ahead, seeing it was the stationary kind with no legs, thinking it was only snow, and plowing right into it head first? Your head would split. Your skis would split. Your spread eagle would do the splits. You’d have ice in places you never wanted it.

Then, ironically, later at the emergency medical station inside the ski lodge, they would give you ice to hold on your aching head.