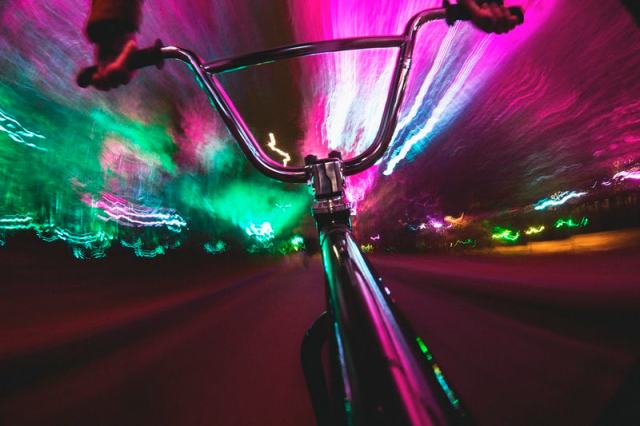 I swear it was only one rocket.

The bike could handle it, I knew, because it was my brother’s. I’d seen him taking it off some epic jumps, brutal jumps, super-mega jumps. The bike was still alive, and so was my brother. I knew it could take the punishment of a single rocket.

There was just enough room under the seat. Everything worked out perfectly. The runway was clear. Fuel was lit. The ride began with expectations—

—and took a century to end. I couldn’t believe the warp on it. It was only one rocket. How did the bike slip out of space-time? There’s no accounting for science. It gets distorted like sound and gravity and plastic in the hot sun.

From here to Mars, then Saturn, and even farther out. The bike and I raced past ice comets and Swiss cheese asteroids. There were seven kinds of aurora. One came too close and was disrupted by the streaking rocket bike.

From eternity to yesterday, the rocket bike cruised past lava flow and rivers full of crocodiles. The haunted house was nothing but a ghostly blur. Ghosts can’t fly as fast as a rocket. They don’t have enough energy.

Broken hearts of the ones who were left behind sounded in the beyond. They were insistent and couldn’t be ignored. A detour was made. A time tunnel, or a wormhole, or both. The bike rocketed through those as well. It was a cosmic U-turn. The runway where it all began came in view and we landed, the bike and I, in my backyard…and crashed through the wooden fence.

My mom came running out, picked me up, and shouted, “Are you alright?!”

She hugged me tight and said, “Never do that again.”

“Sorry about the fence.”

“What are you talking about? I don’t care about the fence.”

“You’ll have to tell him.” She looked toward the house.

“Next time I’ll…I’ll only use one rocket.”