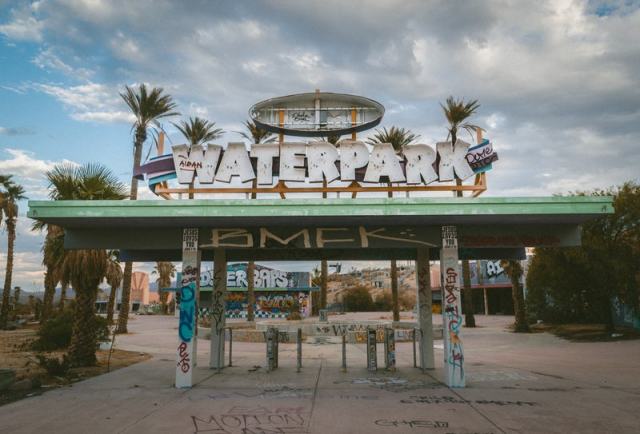 Where I work is at the waterpark. You know it. You’ve seen it from the highway. It ain’t much, but it pays the bills.

My reason for being here, contrary to popular opinion, isn’t the free ride on the water slide. My fellow employees are the whole reason I can do the routine work cycle of each work day: rise, comb, brush, travel, punch the clock, lunch, punch again, travel the opposite direction, and lay this smelly carcass down. That’s the cycle. My favorite thing about my job is the quality of the characters. My fellow employees. For instance, one of the characters I work with says, “A bus station is where the bus stops; a train station is where the train stops; so, of course, at work, I have a work station.”

Oh yeah, he knows how to work something, and it’s called the system.

Another favorite character is the guy who claims that gasoline fixes everything. He has a bad habit of smoking. It doesn’t affect his work at all, only his health. He can barely talk anymore from the hacking cough he’s developed. Sometimes I’ll catch him smoking in the cafeteria. He tells me he doesn’t have time to put down the ham sandwich, and he never flicks his ashes. He just lets them fall off with the force of gravity as they become a long enough horizontal column. His ham sandwich turns into an ashtray, if he holds it with the wrong hand. When we had a problem with the cash register the other day, he fixed it. When he was done with it, you could have sprinkled it on a sandwich.

Another of my favorite characters, one of my fellow employees, isn’t a fellow at all, she’s a woman. She has the superpower of ceaseless banter. I wish I had that power. There are so many situations where that would be a useful skill. My whole vocabulary some days is “yep” and “nope”. But she can carry on a conversation with anyone as if they both were lifelong friends. I have to admit though, she can contradict herself. Just the other day she told me about one of the customers who was talking to her, and “he wouldn’t stop talking. It was him. It wasn’t me.” She told me this, and I couldn’t stop laughing. Since I didn’t witness the scene, I had to imagine it, and I imagined two people with random subjects popping in their conversation every five seconds so that every minute twenty-four separate subjects were covered and dispatched.

There are no more Cracker Jacks sold in the cafeteria. If you want some, you have to bring your own.

There’s no water in the pools, unless it rains. Kind of like the same way I wash my car.